On Nov. 20, a short documentary will be screened about the life of a trans woman in recognition of Transgender Day of Remembrance 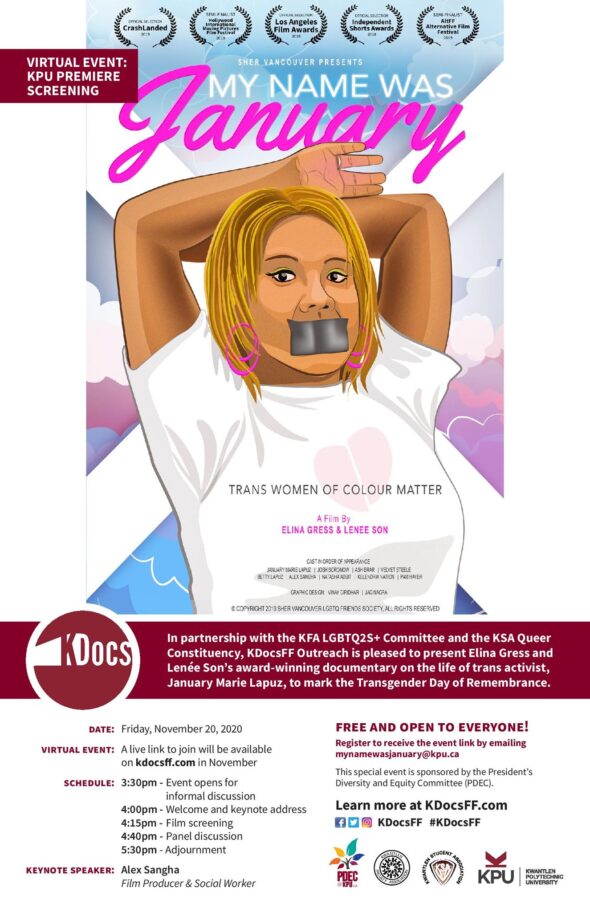 KDocsFF is hosting their first virtual event with the screening of the award-winning documentary on trans activist January Marie Lapuz in recognition of Transgender Day of Remembrance.

KDocsFF has partnered with the Kwantlen Faculty Association LGBTQ2S+ Committee and the Kwantlen Student Association’s Queer Constituency to live screen the short documentary My Name Was January on Nov. 20 to mark Transgender Day of Remembrance. The documentary was directed by KPU Alumni Elina Gress and Lenee Son and produced by Sher Founder Alex Sangha and Sher President Ash Brar.

“The KFA and KSA approached me at KDocs about helping them out to do a screening because they wanted to reach a wider audience, and thought KDocs could help with that,” says KPU instructor Greg Chan, who serves as the Community Outreach Director for KDocsFF.

The documentary was released six years after the death of January and took three years to film and edit. Elina Gress, one of the directors of My Name Was January, says it was originally meant to be a five-minute eulogy for January, but they felt it could be more than that. The five-minute film became a trailer for the longer 25-minute documentary.

“Alex and Ash approached the journalism department, and the department asked Lenee and I to do the story,” Gress says.

“At first, it was a cool project for school, and we were both interested in multimedia, but when we spoke to Alex and Ash, we were surprised to hear January’s story and inspired to tell it in a meaningful way.”

Gress says they wanted the documentary to be for everyone and for everyone to take something different from it. The overall purpose was for people to understand January was a person.

January is described as the mother and social glue of their friend group, a great singer and dancer. She was funny, loyal and helped many trans women through their transitions, according to Alex Sangha, a friend of January’s and a documentary producer.

“At the end of the day, January was living in poverty, she was an immigrant, she was Filipino, she was transgender, she had challenges, but you walk away from the film feeling like she was just a human being,” Sangha says.

In September 2012, at the age of 26, January was found stabbed multiple times by a client in her apartment in New Westminster. She died in the hospital later that day.

Velvet Steele, a human rights activist and a friend of January’s, said she felt “gutted” from the news of January’s death.

“Reading in the newspaper about a friend’s death is not how you want to find out,” she says.

“She was just working hard to be herself to be accepted into society. But the acceptance isn’t there for individuals like January.”

Gress says it shouldn’t matter what a person does or who they are in their life.

“Just because she was a trans person doesn’t mean she should be treated any differently,” she says. “She was a person.”

Sangha recalled the grief his group of friends went through and the experience of being so traumatized and shocked by her death that they did nothing as a group for the next two years.

At the news of her death, he says he received calls from media shifting blame to January for being a sex worker. Unhappy with how January was being represented, Sangha pursued creating a film about her life, which became the force that mobilized his friend group again.

“We just wanted to make a memorial for our friend,” he says. “We wanted to remember her in our own way and create a eulogy for her as the ones who knew her and have control over how our friend was being presented.”

The KDocsFF screening of the documentary was originally organized for June in collaboration with Surrey Pride, but due to COVID-19 health restrictions and shutdowns the screening was cancelled.

“Our committee decided to move it to November twentieth, and I stayed in touch with Alex Sangha and the panellists,” Chan says. “We wanted to hold onto it.”

Nov. 20 is significant because it is Transgender Day of Remembrance. It was started in 1999 by transgender advocate Gwendolyn Ann Smith to honour the memory of Rita Hester, a trans woman who was killed in 1998. Ever since then, the day is set aside to recognize the lives of all transgender people lost to violence each year, and it has become an annual tradition.

Lukas Ritter, a transgender student attending Simon Fraser University, says Transgender Day of Remembrance is a time of reflection but with mixed emotions.

“It’s a time to think back on the history of the trans people that came before me and the opportunities they paved the way for and remembering that community history.”

“I feel sad but also angry, sort of like a helplessness,” he says. “There is not a lot I can personally do that I don’t already do, and it makes me mad that people have and are still suffering because it doesn’t have to be this way.”

For Steele, Transgender Day of Remembrance can be overwhelming, remembering those who were lost and those who are still suffering.

“When you think about the stuff that’s gone on to individuals on the planet, you always have feelings of doubt as to whether the message is getting out there and what it’s really all about,” she says. “Underneath it all, we are just people who should be afforded the same rights.”

“People are people, and they should be respected no matter what,” Steele added.

Sangha says we need to remember people we have lost, not only to honour their legacy and honour them as human beings but as a reminder to prevent the violence from happening again.

“If you forget the past, you are [doomed] to repeat it. You have to learn from your mistakes and learn from what happened in the past to avoid repeating it over and over again.”

He adds that a lot of people don’t realize how marginalized or difficult the life of transgender people can be and how much they go through.

Between Jan. 2008 and Sept. 2019, 3,314 transgender and gender non-conforming people were reportedly killed in 74 different countries. In 2019 alone, there were 331 deaths reported worldwide, 30 of those were reported in the U.S. So far this year, the deaths of 34 transgender or gender non-conforming people have been reported in the U.S.

“The situation seems to be getting worse,” Sangha says. “It’s an epidemic.”

While making the film, Gress says she learned a lot about the trans community and issues the community faces every day.

“I learned a lot about the challenges, especially trans women of colour dealing with life-threatening issues on a daily basis, and I didn’t have any knowledge about the trans community before.”

“I’m very privileged as a cisgender person, so I don’t deal with those same issues, and it made me a lot more appreciative of my life,” Gress says.

As a KPU production completed by student journalists, My Name Was January has won 13 awards. In an effort to tell experiences from people with lived experience, trans women of colour, Indigenous women, and family and friends of January were interviewed to make the documentary.

These are people that could speak to the challenges and barriers that those communities face and for their voices to be heard, Sangha says.

The documentary shows who January was. It’s a memorial for her and all the trans women who have lost their lives.

“There are movies and documentaries about people that paint them in a negative light and focus on things that aren’t really part of their life as to who they are today,” Steele says. “What they did [in this film] was draw at the heartstrings of individuals affected by [January] and those who were affected by that type of situation, even for those that didn’t know her.”

“A lot of trans issues rarely come up in a positive light,” Ritter says. “We are out here and we are people, and the community is suffering.”

Steele hopes that after watching the documentary, people learn to respect and accept individuals without stigmatizing them.

My Name Was January will be live screened on Nov. 20 at 4:15 pm after Alex Sangha’s keynote address. After the screening, there will be a panel discussion with Elina Gress, Velvet Steele, and activist Jack Kennedy. A link will be posted to the KDocsFF website or sent via email at mynamewasjanuary@kpu.ca.