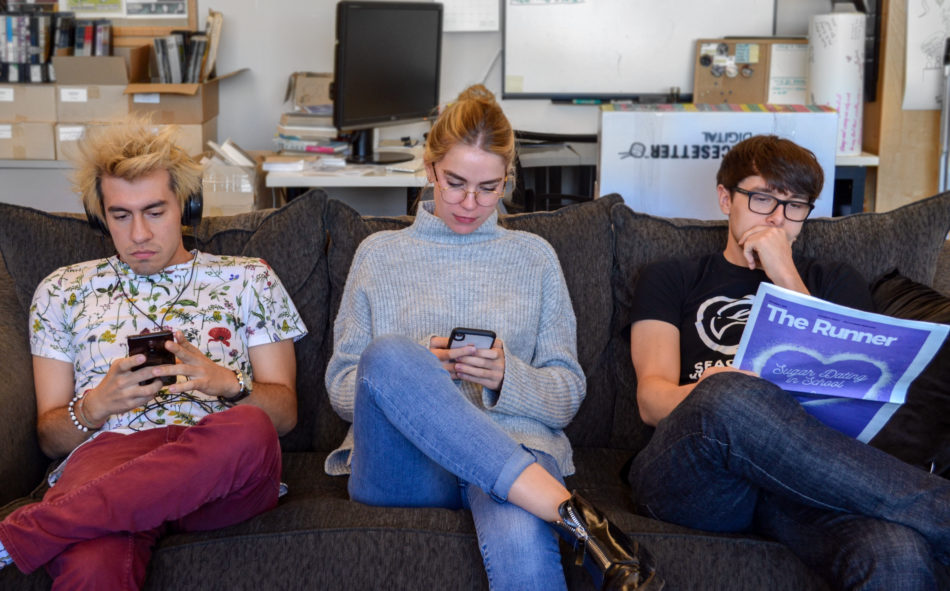 Listening to podcast, reading on your phone, or reading an old fashioned newspaper are common ways people consume the news. (Kristen Frier)

Other than my casual intake of CBC and the Globe and Mail, National Observer is a somewhat underappreciated source of news. Formed in 2015, the National Observer was partially created to avoid the big oil money that was finding its way into other newspapers.

This makes their B Corporation status notable, which suggests that they have a high “social and environmental performance, public transparency, and legal accountability to balance profit and purpose.”

While the National Observer does have a progressive lean, their writing is investigative and fair, and it doesn’t feel like you’re being told what to think. They also have numerous news awards, such as the National Newspaper Award for business reporting, the Canadian Association of Journalists award for outstanding investigative journalism in online media, and “Independent Publisher of the Year” from the Canadian Online Publishing Awards.

With the amount of fake news taking over digital media, it can be difficult to choose credible sources to help inform your decisions before heading out to vote.

One major element that separates fake news sources from credible sources is what most podcasters refer to as “corrections corner.” When I choose news sources, I pick the ones that make a point of listing corrections at the beginning of the article or episode, to rectify any mistakes made, story development, or misinformation shared in previous episodes. Correcting mistakes made in previous episodes shows the viewer that the media organization is committed to the truth and holding themselves to a high standard of journalistic integrity.

My favourite Canadian podcast organization is CANADALAND. The podcast is created and hosted by Jesse Brown, a Canadian journalist who won his first journalistic award at just 17 years old for starting an underground newspaper at his highschool. CANADALAND provides listeners with an in-depth and critical view of Canada’s government and international relations. Jesse Brown has no problem with arguing with his guests on the show, specifically when it comes to criticising their or other media institutions’ journalistic practices.

There are a number of other podcasts with hosts personally chosen and hired by Jesse Brown under CANADALAND. OPPO is a CANADALAND podcast about politics in Canada right now with journalists Jen Gerson and Justin Ling. What makes this podcast especially interesting is that the hosts describe themselves as being on opposite sides of the political spectrum. Justin Ling takes the left-wing role, and is a member of the LGBTQ+ community. Former host Jen Gerson is a right-wing, B.C.-raised mother now residing in Alberta.

The representation from both sides makes for an interesting and heated show that always keeps me interested and informed on issues affecting left and right-wing Canadians.

CTV anchor Lisa Laflamme has a history of unbiased and accurate reporting and has covered every federal election since becoming an anchor in 1997, demonstrating her ability to report fairly as well as citizens’ approval of her coverage. Additionally, she was a moderator for the 2019 English language federal leaders debate, proving her status as a savvy political journalist. For these reasons, I watch CTV and follow Lisa Laflamme on Twitter to keep up with election news.

For days when I don’t have time to sit down and watch the news or read the paper, I have my news notifications to keep me updated. I have the CBC news and BBC news apps downloaded and notifications turned on, so throughout the day I am getting updates on important local and global events. I like CBC for local news because they aim to report without bias and do a lot of political explainer articles. BBC is where I get my global news because they report a lot on European politics, which I am interested in but don’t see a lot of coverage about on CBC, especially during a Canadian federal election.

News sources I avoid are CNN and Fox News. These two networks are open about their biases and report as such. They can be helpful for getting preliminary information, but I avoid interacting with their political stories.

I like to check out Reddit every once and a while stay updated on political news. The subreddit r/CanadaPolitics is effectively moderated so that the posts and comments are relatively sensationalised or editorialised, which keeps discussions civil, well-informed, and more neutral than other online politics forums. It’s a great aggregate of different articles by a variety of publications, and it encourages healthy discourse which attracts people who are interested in policy and the drier elements of government, as well as the entertaining spectacle of politics.

Speaking of entertaining spectacles, I usually enjoy watching the At Issue panels featured on CBC’s The National. Frequent guest pundits include Andrew Coyne from the National Post, Chantal Hébert from the Toronto Star, Althia Raj from HuffPost and Paul Wells from Maclean’s. All of these journalists are very accomplished political reporters and generally well-spoken and informed people who each have distinct viewpoints and voices.

Most guests on the show can provide some wry or insightful commentary about current affairs, and even if I don’t agree with (or care about) anything they say, I’ll usually learn something interesting. Or laugh at something funny they said. Or both.

The panel is moderated by CBC veteran Rosemary Barton, who used to host Power & Politics. She also co-hosts a podcast called Party Lines with Elamin Abdelmahmoud who covers politics for BuzzFeed, and they’re hilarious together. I’m also a big fan of Vassy Kapelos who currently hosts Power & Politics, and has a great knack for fact-checking and calling out politicians when they start getting evasive or are trying to spin an issue.

Finally, my favourite sources of facts about the upcoming election and Canadian politics are the CBC’s Canada Votes project online and 338 Canada. The former is a super comprehensive resource that can help you understand which party most closely aligns with your political beliefs, and where each of the parties stand on important issues facing the country. The latter is a data-driven poll website which also contains info on all 338 ridings in Canada. It’s been an invaluable resource to me, and it’s a great jumping-off point for independent research.

My least favourite source of political information are the televised debates. I don’t particularly enjoy watching people talk over each other for an hour, and the few minutes they give each candidate to answer questions is way too short a time for them to effectively explain and discuss the most important nuances of policy. It feels like watching reality TV, and it’s a reductionist portrayal of important issues that I feel deserve genuine thoughtful discourse instead of expression through talking points and soundbites.