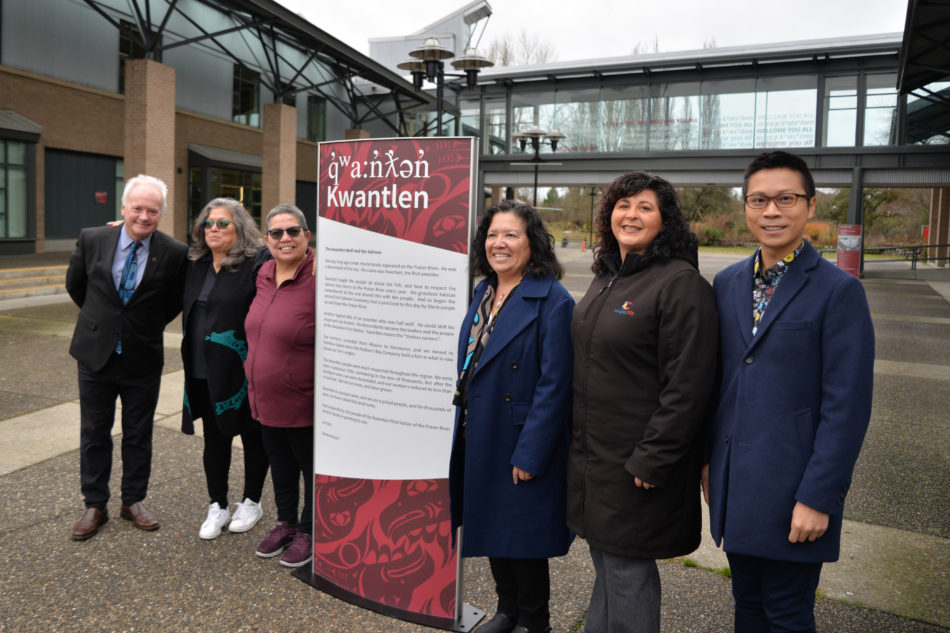 If you’re attending classes on the Langley or Surrey campuses, you may have noticed some relatively new signage in both English and hən̓q̓əmin̓əm̓, the dialect of Halkomelem traditionally spoken by members of the Kwantlen First Nation.

The new signage, installed mid-November, was the result of a collaboration between KPU President Alan Davis, Kwantlen First Nation artist Brandon Gabriel, Langley School District teacher Fern Gabriel from Kwantlen First Nation, and KPU’s Elder in Residence Lekeyten. According to Davis, Brandon designed the wolf and salmon seen on the sign, which also appears on KPU’s coat of arms, and Fern helped to translate the signs from English to hən̓q̓əmin̓əm̓. 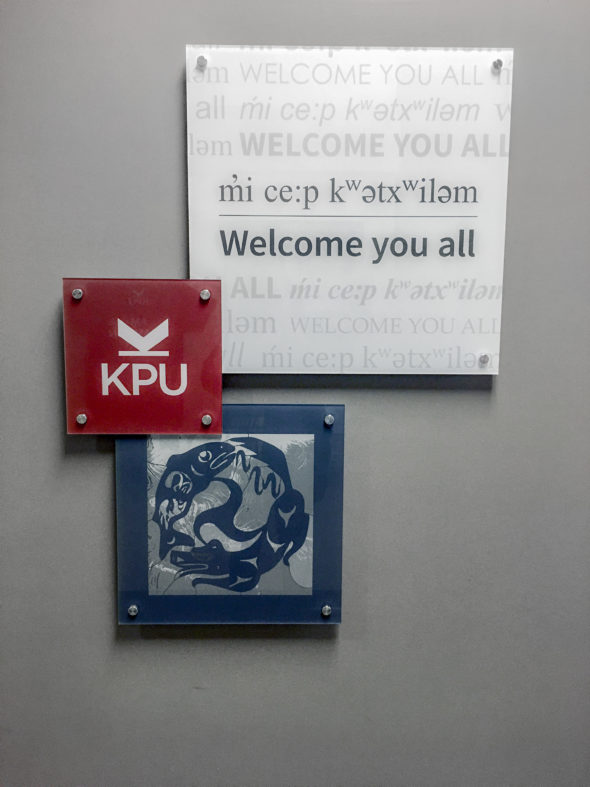 KPU has installed Hən̓q̓əmin̓əm̓ signage on both the Langley and Surrey campuses. (Kristen Frier)

After this process, the designs for the signage were presented to Lekeyten and KPU’s Indigenous Advisory Committee, then implemented and installed — first across the Langley campus on Nov. 18, then on the Surrey campus near Grassroots in the Cedar Building.

Davis says the installation of the signage is one of many steps KPU is taking to implement the Calls to Action in the Truth and Reconciliation Commission’s 2015 report. The university is working on a plan to take further steps, including the potential creation of an Indigenous speaker series.

At the moment, most of KPU’s focus is on implementing the Calls to Action relating to higher education, such as making sure Indigenous students feel welcome at school and ensuring that they have a pathway to both enrolling at KPU and thriving there. The university also plans to educate the general public about the history of the unceded land that students, faculty and staff live, work, and learn on, as well as the people to whom these lands belong. Davis says he hopes the university can achieve a sense of true reconciliation with Indigenous people and believes that everybody involved should be included in this process.

Though there has been no clear timeline announced for the installation of similar signage for the Richmond, Cloverdale Tech, and Civic Plaza campuses, the official news release from KPU states that the signage will be installed at these campuses “in due course.”

From the Editor: A Year of The Runner in Review and What’s to Come for 2020